Passage West Town Council supports the removal of the gate fee for recycling at the Raffeen Civic Amenity Site.  There has been much concern locally at the introduction of this charge.  At its March monthly meeting, the Town Council unanimously supported a 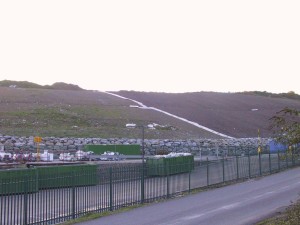 motion which suggested that Cork County Council would use incentives and schemes promoting sustainable waste management to finance the operation of Civic Amenity Sites in lieu of the €3 gate fee, as the latter is having a generally negative effect on the diversion of waste from landfill.

The motion will now be sent to the County Manager as a request from Passage West Town Council.  It will be accompanied a case study which Cllr. Marcia D’Alton gave when introducing the motion.  The Town Manager suggested that the case study would help to illustrate to the County Manager the effect the €3 gate fee can have both on a typical young family and on materials management at the household level:

“We are a household of six.  We generate approximately one bag of rubbish every two weeks.  Since the introduction of pay-by-weight, we have used the Raffeen Civic Amenity Site for all our waste disposal and recycling: we have young children and the cost of nappies in pay-by-weight would have been exorbitant.  However, I live in an estate house with no garage and I have facilities to store recyclable materials generated only over the course of one week.  So I paid a visit to the Civic Amenity Site every week with my sorted recyclables and every second week I would also bring along a bag of rubbish.

The charge for disposing of one bag of rubbish at the Civic Amenity Site was €8.  Consequently, the cost of our household waste management using this system was €218 per year.  This compared favourably with private waste collection.  At present, Country Clean is charging €275 per year plus a once-off charge of €65 for the purchase of the general waste bin and €35 for the purchase of the recycling bin.  Wiser Bins is charging €280 per year and a once-off charge of €45 for the recycling bin.

But on 1st February, a €3 gate fee was introduced at the Civic Amenity Site.  For our system of household waste management, the cost escalated from €218 per year to €432 per year, i.e. €3 for each recycling trip and €10 for each bag of general waste.  This was unacceptably high.

So I did some shopping around.  For new customers, Cork County Council is offering a flat one year introductory rate of €250.  We signed up to this, so we now have two bins outside the house: one for recycling and one for general waste.  These are collected on alternate weeks.  Glass is not acceptable in the recycling bin, so I make a trip to the bring site at Monkstown whenever necessary, usually once each month.

My old toaster finally went irretrievably out of order some three weeks ago.  It will still be collected at the Civic Amenity Site for free because, by law, Cork County Council is not permitted to charge for the collection of Waste Electrical and Electronic Equipment.  But the new toaster which replaced it came with cardboard, plastic and polystyrene packaging.   Heretofore, I would have gone to the Civic Amenity Site with the old toaster, put it in the WEEE section, put the cardboard into the cardboard compactor and the polystyrene into the polystyrene bin.  The Civic Amenity Site hasn’t taken light plastic for a long time (collection ceased because of contamination), so I would have put this in the general waste at home.  Since the 1st February, I can leave the toaster for free at the Civic Amenity Site, but to recycle the rest of the packaging from the new toaster, I must pay €3.    Instead, I put my cardboard into the recycling bin outside my front door.  But I am not allowed to put light plastic or polystyrene into the recycling bin, so I have to put it into the general waste bin.  So now my polystyrene is destined for landfill rather than for recycling.    Am I going to drive specially to the Raffeen Civic Amenity Site to recycle my toaster?  I am perhaps unusual in that having worked in waste, I am acutely aware of the issues.  That aside, I am in Monkstown several times each day and so it is not a huge issue to drive to Raffeen.  But for people who don’t work in the waste field and who live in Carrigaline or Douglas, which is easier: to drive to Raffeen with the toaster or to put that toaster straight into the general waste bin for which there is a flat charge?  So that is a toaster destined for landfill rather than recycling.

All national and local policy is aimed at diverting waste from landfill.  The newly introduced €3 gate fee for Civic Amenity Sites in Co. Cork is diametrically opposed to this.  In November 2005, I introduced a motion to the effect that Cork County Council should establish a “Goods Rehoming Facility” adjacent to the Raffeen Civic Amenity Site.  The term “Goods Rehoming Facility” was chosen to indicate that the function of the facility would be the acceptance of good quality/nearly new items still capable of performing their original function.  This was initiated by the observation that many of the goods accepted at the Civic Amenity Site was perfectly serviceable and/or in relatively good condition.

This was not a novel concept.  It was, and continues to be, done in many countries.  When introducing the motion, I discussed some such Goods Rehoming Facilities in operation worldwide.  In terms of the waste hierarchy, reuse is of course far preferable to recycling.

The motion was fully supported by Passage West Town Council.  So I subsequently gave a presentation on behalf of the Town Council to Enda Kiernan, Senior Executive Engineer of waste management with Cork County Council.  He too was very taken with the idea.  Some time later, I went to County Hall to discuss the concept with Patricia Power, then Director of Services, Environment, and Mary Stack, Environmental Awareness Officer.  They too approved strongly of the proposal.  They noted that a container on the Raffeen Civic Amenity Site was kept specifically for particularly high quality items rescued from disposal at the site.  As a consequence of our proposal, they initiated a mini-Goods Rehoming Facility at the Macroom Civic Amenity Site.

But the Macroom initiative was open for only a couple of hours on a weekday morning, one day per week.  I commented at the time that this would be destined to failure: a Goods Rehoming Facility must become a convenient alternative to going out to buy new if it is to succeed.  However, issues of staff shortages and recruitment embargoes were cited as being the reason it couldn’t have longer opening hours.

Since before Christmas, a specific policy of not rescuing any goods regardless of quality has been introduced at the Raffeen Civic Amenity Site.  So, while heretofore if I wanted a bicycle for one of the children, I went to the Civic Amenity Site, I was told that nothing was available now or would be available in the future.  No Goods Rehoming Facility has been developed.  Four years on, the bottom has fallen out of the recycled materials market, the need for general waste disposal facilities grows ever more acute and Cork County Council is not merely discouraging customers but is also adopting policies which actively increase waste to landfill.

A Goods Rehoming Facility would:

If Cork County Council is interested in diverting waste from landfill, I believe it would have been preferable to close the Civic Amenity Site from Monday – Wednesday inclusive with full service available from Thursday – Saturday inclusive rather than to apply a gate fee to all who are striving to manage their waste correctly.

When my family loses its first-time customer status next year and becomes subject to the pay-by-weight system, we will switch to a private waste collection service.  Although we would prefer not to, the cost of nappies in the pay-by-weight system would be prohibitive.  And so Cork County Council, rather than making money for its waste collection service, will lose one of its most loyal customers.

The €3 gate fee is not merely a disincentive to diversion of waste from landfill and an encouragement to dump waste illegally; it will drive customers away from the Civic Amenity Sites and I can see no way by which it will contribute to the finances of the sustainable running of Civic Amenity Sites in the longer term.”