“That Cork County Council would become a partner to the All Ireland Pollinator Plan.”

My introduction to the motion: Text of motion

The CE said he was positively disposed towards signing up to the All Ireland Pollinator Plan.  He wants the motion to go to the Environment SPC so that the Council’s specific actions for the first year will be identified in advance when we sign up.

“That Cork County Council asks the government, and members  of the Joint Committee on Communications Climate Action and Environment(both TDs and Senators) to bring the Petroleum and Other Minerals Development (Amendment) (Climate Emergency Measures) Bill before the Dáil for consideration such that in this time of climate emergency it may be considered for passing into legislation, with or without appropriate amendments, without delay as an acknowledgment of the fact that we face a climate emergency and cannot hope to limit global temperature rises without leaving 80% of already  proven reserves in the ground.”

My introduction to the motion: Introduction_to_Motion

My introduction to the motion: My motion to full Council on housing for the elderly 10-12-2018

“This Council would agree to draft a scheme providing for the waiver of a portion of the rates due to Cork County Council when ratepayers in a town centre can demonstrate a reduction in turnover of 30% or more due to an extended period of road closures granted by Cork County Council. That approval for this waiver scheme would be sought from the Minister in accordance with the requirements of Section 2 of the Local Government (Rates) Act 1970.”

Executive’s response: Response to Notice of Motion by Cllrs Dalton McGrath and Murphy

“That planning legislation would be amended to require all members of An Bord Pleanála appointed by the Minister to be qualified in a planning or planning-related field and to have demonstrated long-standing experience and interest in the planning system.  This is to ensure that the Board can uphold its core function, i.e. to provide, in the interests of the common good, for proper planning and sustainable development.”

“That Cork County Council would, in joint co-operation with Cork City Council, prepare a submission for the following collection of related sites and fortifications to be considered for inclusion on the World Heritage List:

Minister’s response: Department of Culture Heritage and the Gaeltacht re World Heritage List

“That Cork County Council would initiate a paint reuse scheme in each of its 11 Civic Amenity Sites.  The aim of the scheme would be to offer good quality reusable paint to community groups, charities and others while reducing the volume and cost of waste for disposal.”

“That this government would initiate a comprehensive review of national environmental noise legislation, including Regulation SI 140/2006 (Environmental Noise Regulations) and the Roads Act 1993, with a view to:

“That Ireland would ratify the International Convention for the Control and Management of Ships Ballast Water and Sediments 2004.”

“That Cork County Council would use the powers granted to it under Section 71 of the Local Government (Planning and Development) Act 2000 to take Vernon Mount (No. 00480 in the Record of Protected Structures) into public ownership.

That in thus acting in accordance within its statutory powers to respond to its commitment in HE 4-1 of the County Development Plan, Cork County Council would be mindful that:

My introduction to the motion:  Vernon Mount 2

My introduction: Suspension of standing orders re Indaver FI, 22-05-2017

My introduction to motion: Green Infrastructure 27-03-2017

“That this Council requests amendment of the Valuation Act 2001 such that standard rates would be payable on constituency offices run by members of the Oireachtas for representational purposes.”

My introduction to the motion: Rates on constituency offices 13-02-2017

(Note that in this instance, “estates not taken in charge” do not include unfinished estates as defined in S.I. 91 of 2013.)”

My introduction to the motion: LPT for estates not taken in charge 12-12-2016

“That in building new playgrounds or regenerating existing playgrounds, Cork County Council would introduce a policy of application of the Principles of Universal Design by installing a range of equipment which can be used by both able and less able bodied children alike.  In addition, that towards achieving universal design, Cork County Council would begin a programme of retrofitting all existing playgrounds in its jurisdictional area with at least one item of play equipment specifically designed for inclusivity of all.”

My introduction to the motion: Universal Design of playgrounds 25-09-2016

Brief I prepared to assist D/Chief Executive: Brief for ACE

My introduction to motion: Recreation and Amenity section

“That Cork County Council would identify

and that Cork County Council would pursue the owners of Vernon Mount (No. 00480 in the Record of Protected Structures) for prosecution under Section 58 of the Local Government (Planning & Development) Act 2000.”

“That Cork County Council acknowledges the ongoing shortage of places in special education classes for students with an autism spectrum disorder diagnosis at secondary level.

That if the National Council for Special Education (NCSE) identifies a need for additional special education classes at either primary or secondary level in a defined geographical area, the Department of Education and Skills would require schools in the geographical area to respond to this identified need by establishing an adequate number of such special education classes to match that need.

That the necessary funding for both the set-up and running of these special education classes would be provided by the Department.

That this need is not unique to Cork and consequently that this motion is circulated to all other local authorities in Ireland for their consideration and support.”

My introduction to the motion: ASD units in secondary school 27-06-2016

Minister’s response 2: ‘Correspondence from Minister for Education and Skills Oct 2016’

“That Cork County Council would envoke its powers under Section 35 of the Planning & Development Act 2000 and refuse to grant planning permission for new developments to developers who have left unfinished residential estates in either County Cork or any other county in Ireland.”

“That Cork County Council would undertake a health check of the vitality and viability of town centres in all main towns in County Cork.  Such regular health checks are a recommendation of the Retail Planning Guidelines (2012).  That the results of and recommendations arising from the health checks would be incorporated into the revised Local Area Plans.”

My introduction to the motion: Vitality check for town centres

“That the Environmental Protection Agency would set up a permanent air quality monitoring station at a representative location in Cork Harbour.  That this air quality monitoring station would be capable of measuring concentrations of all the parameters for which limit values in ambient air have been set by Directive 2008/50/EC, including particulate matter.  Cork Harbour is one of the most important industrial areas in Ireland, significant at a worldwide level within the pharmaceutical industry and a major port.  Although Cork Harbour and its immediate environs is home to 44,000 people and an employment hub for over 10,000 people, there is currently no ambient air monitoring in Cork Harbour.”

My introduction to the motion: Air monitoring in Cork Harbour

EPA’s response to the motion: Correspondence from EPA

“That a planning application to An Bord Pleanala made under the Strategic Infrastructure Act can be made no more than twice for the same nature of project on the same site.”

My introduction to the motion: SIA limited to 2 times

“That the State would acknowledge its responsibility to people who in attempting to buy their own homes, now find themselves with hazardous properties not constructed in compliance with the building regulations.

And that Cork County Council asks the Department of Environment, Community & Local Government to move away from the current system of self-regulation in the design and construction of buildings and to replace it with an independent Approved Inspector system similar to that operating in the UK.”

My introduction to the motion: Buildings inspection

“That Cork County Council would encourage all roadside traders to observe the requirements of SI 191 of 2004 with regard to the selling of strawberries, raspberries, blueberries, gooseberries, blackberries, loganberries, tayberries, currants and new potatoes during May to September inclusive.  Equally, that Cork County Council would encourage the selling of a greater range of fruit and vegetable produce than those specified in the Regulations in designated market areas and in accordance with a Casual Trading Licence.  All opportunities for genuine growers to maximise the sale of their produce are welcome insofar as they do not place rate-paying shopkeepers at unfair disadvantage.”

My introduction to the motion: Trading bye-laws

“That State job activation measures should be available to all who are unemployed, not only to those on the Live Register. That if passed, this motion would be circulated to all local authorities in the country.”

My introduction to the motion: The invisible unemployed – motion 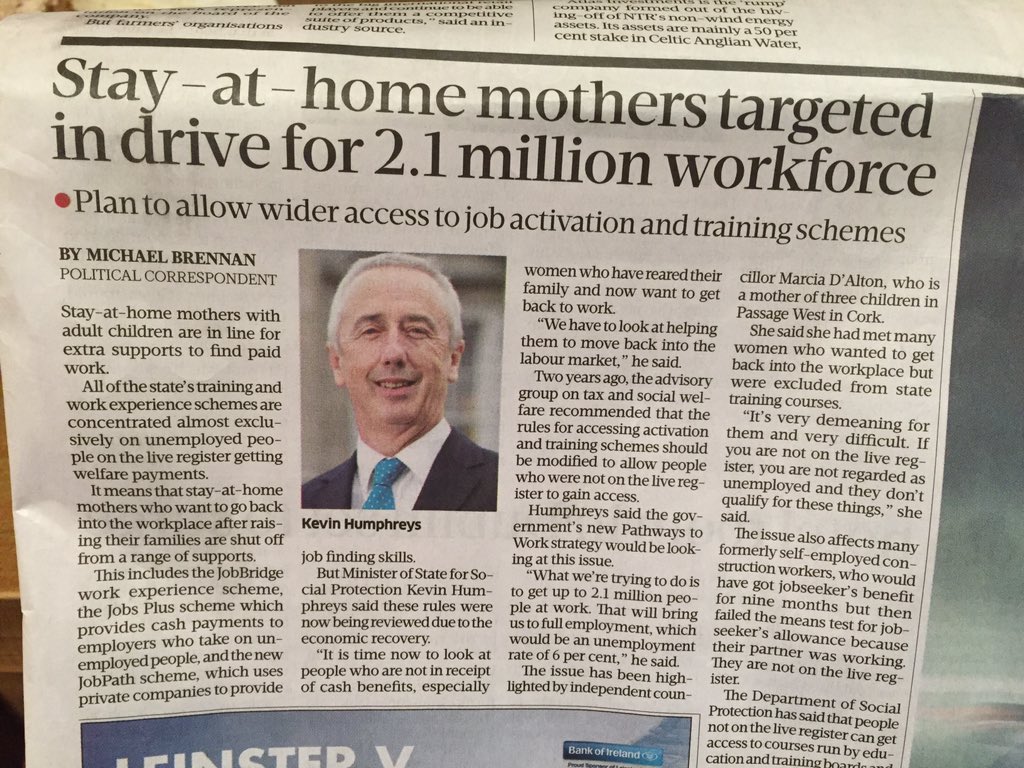 “That in view of its obligations under

and particularly with regard to EU Regulation 1143/2014 on the prevention and management of the introduction and spread of invasive alien species which entered into force on 1st January 2015 and which lays down rules for the prevention and minimisation of the adverse impact of the spread of invasive alien species and requires a risk assessment within 18 months and a comprehensive control programme within 3 years,

My introduction to the motion: Japanese knotweed

MOTION TO FULL COUNCIL – RECOGNITION THAT THOSE WITH SPECIAL NEEDS LIVING IN OUR COMMUNITY MAY BE AFFECTED BY ADJACENT PLANNING DECISIONS,
25/05/2015

“That this Council acknowledges that those recognised as disabled under the Disability Act 2005 living within our community may have special needs which may be affected by adjacent planning decisions.  Consequently this Council asks that government would amend standard planning guidelines to include consideration of those special needs when they are supported by medical expertise”.

My introduction to the motion: Planning for the disabled in our community

“To request a report detailing Cork County Council’s current policy on dog fouling.  To include:

My introduction to the motion: Dog fouling

“That Irish Water would:

Should Irish Water not address this issue, Cork County Council cannot advance the taking in charge of residential estates throughout Cork County.”

My introduction to the motion: Irish Water protocols for taking estates in charge

My introduction to the motion: Traffic calming in residential estates