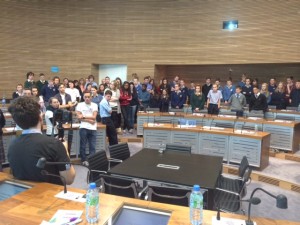 I was massively pleased to get the opportunity to deputise for the County Mayor at the opening of the Cork County Comhairle na nOg AGM in County Hall on the morning of the 6th November.  More than 80 young people from secondary schools all over County Cork attended.  Fantastic, aware young people and so well able to express themselves.  True ambassadors for the Ireland of the future.  I am hoping the County Council will do lots of work and consultation with the Comhairle during the next few years.

This is the speech with which I opened the AGM:

You are all hugely welcome to County Hall this morning.

I am truly honoured to have the role of officially opening the AGM of Cork’s Comhairle na nÓg.

The United Nations passed the Convention on the Rights of the Child in 1989.  Ireland ratified the Convention in 1992.  Then in 2000, 8 years later, the government produced Ireland’s first National Children’s Strategy.  This was to guide Irish policy on children for the following 10 years.

One of the most important goals of this National Children’s Strategy was to listen more effectively to children.  One of the ways this was to be achieved was to set up formal structures for listening to children.

It was out of this goal that the 34 Comhairli around Ireland were set up in 2002.

The purpose of the Comhairli is to give young people an opportunity to take part in influencing local policy, planning, decision making and local services.  We, Cork County Council, want to be able to consult with you when we are developing policy and services that are relevant to young people.  Equally, the Comhairli allow young people the opportunity to identify and prioritise topics that are important to them.  And we, as Cork County Council, want you to be able to consult with us when you want to progress these topics.

Your monthly meetings are a wonderful opportunity to further discussion.  The Cork Comhairle is represented on the National Executive and this allows the young people of Cork to contribute directly to the development of national issues.

The Comhairle na nOg AGM is a once-a-year chance to get to grips with an important and topical issue of relevance to young people.  Young people understanding and advancing something really significant to young people.  What could be more constructive!

And the Showcase Event that the Comhairli organise through the National Executive once every two years is an occasion I for one am hoping to attend next time around.

So much has been and is being achieved through Comhairle na nOg.

The focus of the National Executive both this and next year will be the theme of Mental Health, especially focusing on the need for a national youth gathering for second level students with music and events.

In 2012 and 2013, they worked on identifying the best ways by which young people can influence governmental decision making.

In this past year, the Cork Comhairle has done wonderful work towards making public transport more affordable for young people.  To achieve this, you worked with key decision makers in the Department of Transport, Tourism and Sport and with local TDs to introduce a new public transport pricing mechanism.  This was such a practical and relevant improvement that will make life better for so many young people across County Cork.

Each year, the Comhairle’s AGM has a theme.  And this year the theme is the UN Convention on the Rights of the Child.  Why?  Well because this is 2014, the 25th anniversary of the treaty.  Do you know that this is the most widely ratified human rights treaty in history?  193 countries have signed up to it.

The Convention has 41 articles and each one of those articles describes a separate right.  Rights such as a certain standard of living, food, water, clothes, shelter, education, the right to fulfil your potential, your right to no discrimination, protection from abuse, expressing your opinion, privacy and so many more.

By signing the treaty, each government takes the responsibility of making the rights of children as defined in the Convention a reality.

The Irish government has been working on this.  But there are aspects it still needs to work on.

And the best way to work on improving the rights of children is by talking with and listening to young people.

And that is where the Cork Comhairle na nOg comes in.

So best of luck to you all in your AGM as you discuss this and other topics.  And best of luck in this hugely important role.  Because in this, you are improving not just your own lives but the lives of countless numbers of children coming after you.