If I told you that a female alien had come down from space, was self-propagating and gradually invading the earth, what would you say?  That as it grew and multiplied, it would gradually kill off our grasses, ferns, buttercups, daisies, nettles.  It would kill off the butterflies, ladybirds and the familiar insects which depend on those plants.  It would knock walls, damage paving, cause erosion of riverbanks and flood defence structures, it would destroy archaeological sites and it would attack homes.  Would you say that I was losing the run of myself?

Because right now, that is what is happening!

Japanese knotweed was brought to Europe in the mid-19th century by a German botanist who found it growing on the sides of volcanoes in Japan.  It was celebrated as a new ornamental plant and in 1850, the Royal Botanic Gardens at Kew received its first shipment of knotweed.  Four years later, the plant was sold commercially in nurseries.

In its native Japanese volcanic landscape, the climate, natural predators and regular deposits of ash kept knotweed plants small.   The plant survived because of the energy stores in its deep root system.  But in Western Europe, without these impediments, it grows unabated.

At its most prolific it can grow up to 20cm EVERY DAY.  That is 3 – 4 metres in just 10 weeks – the equivalent of two grown adults.  Underground, its roots can spread 7 metres horizontally and can go down up to 3 metres.

All the Japanese knotweed all over the UK and Ireland have grown from that one single female specimen shipped to Kew in 1850.  So because the plants are unfertilized by a male, they cannot produce seed.  For the vast majority of plants, this would mean extinction.  But not Japanese knotweed.  A new plant can grow from miniscule fragments of ANY part of the plant.

So in the case of Japanese knotweed, the absolutely worst thing you can do is to flail, chip or strim it.  Every tiny needle-sized fragment of the plant that flies out from under the chipper creates another new plant.  Every wheel of every car, van or lorry that passes over the flailed material spreads it further down the road.  Every cut stem left lying on the roadside verge will form another plant.

Treatment of knotweed and home devaluations as a result of knotweed costs the UK economy €228 million per year.  One London-based couple saw the bamboo-like stems growing through the floor of their home.  They were told it would be cheaper to knock down and rebuild their €400,000 home rather than try and treat their knotweed problem.  Mortgages have been refused on properties in the UK with a single 3cm stand of Japanese knotweed in their garden.  If a bank’s valuer finds evidence of it or if there is a history of it in the area, a specialist survey will be required.  At least three banking institutions in the UK will not lend, whilst others will consider with the advice of a surveyor but require guarantees or an indemnity to be in place.  Estimates now show at least one infestation of Japanese knotweed in every 10 sq kms in the UK.

And Ireland is rapidly following suit.

Lots of wild plants spread quickly and there are many other invasive species.  But the tremendous problem with Japanese knotweed is that its spread is so difficult to control.

The plant needs treatment with systemic herbicide every year (some recommendations are for twice a year) for 4 – 5 years to kill it.  Sometimes the herbicide is sprayed on; in more sensitive locations such as beside watercourses, it is injected into the stems.  The knotweed can be pulled out by hand but this method of control is really useful only when treating small or new infestations where merely a few stems have established.  You will need to pull each year for at least 3 years.

Pulled Japanese knotweed material should not be left lying on bare ground.  It should be placed on a liner and allowed to dry out.  At this stage, it can be buried, but the burial hole must be at least 5 metres below ground surface and ideally lined with a root barrier membrane.  It should not be composted.  The composting process is not guaranteed to kill Japanese knotweed and it will simply be spread when the compost is used elsewhere.  Mechanical chippers do not kill it either.  Ideally, cut or pulled Japanese knotweed should be taken to a designated landfill site.   Unfortunately, Cork County Council has never designated a landfill site for this purpose.

The management of Cork County Council needs to take the issue of Japanese knotweed seriously.  It will be highly resource-intensive to control and a dedicated fund from national government must be established to assist all local authorities with this.  But in the meantime, the County Council could undertake two most basic of inexpensive steps.

The first important step is to map all stands of Japanese knotweed in the county.  We, the public, can help with this.  The National Parks and Wildlife Service runs a mapping service for all invasive species.  If you see Japanese knotweed or indeed any other species of invasive, you can log it at: http://invasivespeciesireland.com/alien-watch.  Having a log built up allows us to understand the extent of the current problem and whether it is getting worse or better over time.

The other very important step for the Council is to ensure that all its groundworkers and contractors recognise Japanese knotweed and know how to deal with it.   Otherwise further spread may occur inadvertently when verges or hedgerows are being clipped.  Council management wants to await the outcome of an NRA study on the best way of managing Japanese knotweed before it commits any budget to its control.  I find this frustrating.  Other countries who are well ahead of Ireland in handling Japanese knotweed tell us that the best and most logical first step is to try to contain it.

Lest you think this reasonably attractive plant is all bad, it is appreciated as fodder by cows, goats and chickens, the young spring shoots can be eaten as a vegetable and those indomitable roots have incredible medicinal anti-inflammatory properties.  I haven’t the courage to try it out though, in case I cause it to spread into our own home! 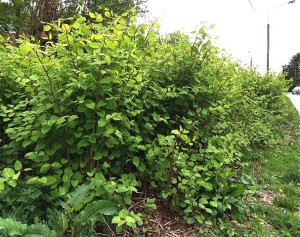